Christmas TikTok: 5 of the Best Campaigns 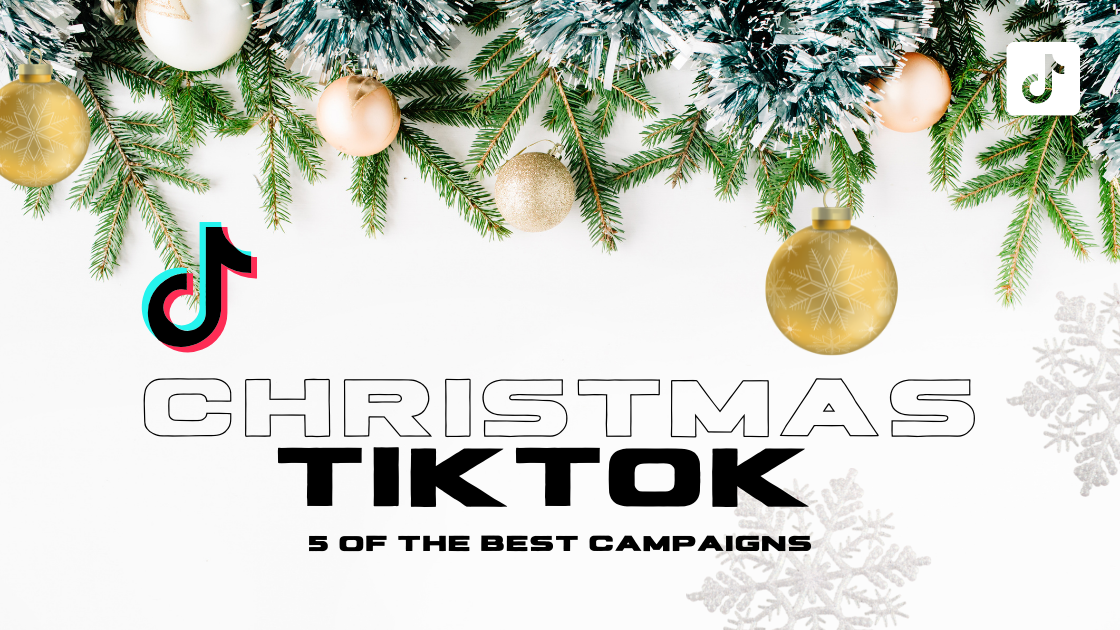 
Can you believe it’s almost time to get decorating your Christmas tree?

Well, maybe not quite yet. October isn’t long gone. But it is high time to start your Christmas marketing strategy. With 500 million monthly active users, TikTok is one route to market that brands can’t afford to ignore.

It’s also the platform most favoured by Gen Z – the generation makes up 70% of the audience. And this younger audience has some serious buying power; estimated at around $140 billion.

If you’re looking to develop a content strategy that gets this valuable market on-side, you’ve come to the right place. We’ve found the top 5 Christmas TikTok campaigns for you to draw inspiration from.

How TikTok can help brands get on Christmas wish lists

This season of giving, e-commerce brands should be sure to stay aware of the growing role TikTok is playing in influencing people’s Christmas wish lists.

Yup, Christmas TikTok is more than dancing to Christmas songs (although we do love Christmas music. We’re looking at you, Mariah Carey and George Michael.)

As many as 80% of users say that TikTok played a role in a Black Friday purchase they made last year. 70% are expecting it to do so again this November. That’s a huge market of potential consumers checking TikTok videos for inspiration, and those buying habits are sure to roll over into the holiday season.

This level of influence is not surprising, given the average time spent on the app is around 52 minutes per day globally.

(Santa, are you taking note?)

So, as we fast approach the Christmas countdown, let’s find out what campaigns have been the most successful at engaging Gen Z on TikTok.

How brands celebrate the holidays on TikTok

Whether it’s with a standalone competition, a filter, a pithy parody or a trending hashtag, here are five of the best ways retailers are approaching their Christmas TikTok marketing campaigns.

It was the question on everyone’s mind. After thirty years of silence, Marks and Spencer’s beloved Percy Pig character was given a voice in their 2021 Christmas TV ad. The supermarket took to TikTok days ahead to tease the big cast reveal.

Sharing the opening few seconds of their TV ad campaign, M&S offered the hashtag #WhoIsPercyPig, with a £250 voucher prize up for grabs for the lucky TikTok user with the correct answer.

The guesses came thick and fast – and with them, the TikTok views.

The answer? Tom Holland, the actor best known for his role as Spider-Man in Marvel’s Avengers films. Obviously.

It’s a smart choice. Holland is a household name, and particularly popular amongst the demographic of young people who M&S were hoping to “attract” with their Christmas ad.

But don’t fret! You don’t have to hire a Hollywood actor to ensure a successful TikTok campaign. working with TikTok influencers can build both brand recognition (hello combined audiences!), and a sense of community amongst your followers.

Social media influencers are one of the most powerful ways to boost your brand awareness. After all, they have huge followings of people who’ve chosen to tune into their channel. If you want to start working with TikTok influencers, get in contact!

2. TK Maxx invites users to celebrate #ChristmasToTheMaxx with their #TKMaxxTalentShow


If I say “Christmas TV”, you say “voting is now open”. Talent shows have become synonymous with the festive season, and for 2021 TK Maxx is taking the talent show to TikTok.

The retailer launched their #ChristmasToTheMaxx campaign, which challenges TikTokers to record videos of themselves performing their talents with the hashtag #TKMaxxTalentShow. It accompanies their TV ad, in which a shy teenager performs after missing out the year before.

With this campaign, TK Maxx are inviting TikTokers into the world of their Christmas marketing. With a specially created Branded Effect xmas backdrop and audio, there’s no chance users will fail to associate the brand’s name with the challenge. It makes it easy for users to get involved – boosting campaign engagement.

One thing that sets TikTok apart is its focus on relatable user-generated content. Fostering your followers’ talents in this way is a surefire route to increasing brand reputation across this key demographic.

Brands taking a leaf from TK Maxx’ book can re-post challenge participants’ TikTok videos on their own channels, or even create a Christmas TikTok compilation to celebrate the best Christmas talent.


For clothing brands, TikTok represents a vast opportunity for e-commerce growth. TikTokers are 15% more likely to make a clothing purchase following a Black Friday deal than users of other platforms.

So it’s no surprise that brands like Pretty Little Thing have a strong presence on the app, where past campaigns have seen them getting involved with the viral #BritneyChallenge alongside running regular giveaways to their 1.7M-strong following.

Their rebranded “Pink Friday” deals in 2020 saw customers promised massive savings across the brand’s stock over the holiday period, and this year they’ve launched a $10,000 giveaway with the hashtag #PinkFridaywithPLT to drive even more awareness.

The challenge invites users to submit TikToks explaining why they should be the winner of the $10,000 prize alongside the #PinkFridaywithPLT hashtag. 45% of Gen Z cite deals, discounts and offers as the top factor influencing their purchasing decisions, so it’s a great Christmas TikTok marketing opportunity.

4. Heinz highlights the importance of Christmas joy with their #FakeAd


When it comes to shareability, there’s little the internet likes more than a funny video. Put that together with a trending topic – like the release of a certain department store’s big advertising campaign – and you’re surely onto a winning combination.

Enter Heinz. Riffing on this year’s much-anticipated John Lewis Christmas advert, the food company have shared their own version of the ad on their TikTok page. The twist? They’ve swapped out the festive UFO for a can of their limited-run festive soup.

With a caption that proudly proclaims “We spent nothing on this Christmas ad. Enjoy

”, the TikTok has meme appeal and has already received over a million views. Both of the brand’s festive vids are now their highest performing.

It just goes to show that giveaways and high production value aren’t always necessary components when building a successful TikTok campaign. A little tin foil can get you a long way.

5. How Pret won Christmas with the festive #JoyWithPret TikTok trend


“Joyful” is probably not the first word in people’s minds when thinking back to last Christmas. But it was the buzzword for coffee chain Pret A Manger’s viral TikTok campaign, which saw their hashtag challenge hit 3.1B views.

Pret tasked users with uploading videos showing what brought them joy, tagging both #JoyWithPret and @PretAManger in their submissions. It was the first time a major UK high street food retailer had launched a branded hashtag challenge on the app. Pret enlisted the help of popular TikTok influencers to spread the word on the platform.

Did TikTokers rise to the challenge? Absolutely. Only one day after launch the campaign had already accrued 139.3M video views. It goes to show how effective a simple brief that leaves the door open for users to get creative can be.

Considering 70% of Gen Z find UGC helpful in making purchase decisions, a Christmas TikTok campaign like this is a great way to build trust as well as brand sentiment, leading to increased sales.

If you want to smash your Christmas TikTok marketing strategy, it’s important to remember to tailor your brand’s content to the platform.

TikTokers love to get creative, and past Christmas successes have proven that tying campaigns together with a consistent hashtag, filter or audio keeps the whole range of their collaborative responses tied to your brand identity.

Most importantly, what all of the above campaigns have in common is that they embrace the spirit of a merry Christmas. While successful Christmas TV advertising campaigns might tug at audiences’ heartstrings, TikTokers prefer authentic collaboration between brands and users. Christmas TikTok is more interactive, more relatable – and more fun.

So don’t be afraid to get involved this holiday season! Leveraging TikTok videos in your Christmas content strategy is just a question of finding the right prompt and embracing your community of followers.

Think like Santa and celebrate the good. Or channel your inner Grinch and find joy in pranks or general Christmas time chaos (after all, the pandemic isn’t quite over yet).

If you want to learn more about engaging with Gen Z, we’ve got everything you need to know right here. Alternatively, get in touch to find out how we can help you grow.