Top 10 Vegan TikTokers – And Why You Should Work With Them

Vegan TikTokers aren’t just for Veganuary. They’ve got incredible followings all year round. We’ve listed 10 of the best - and what they can bring to your brand. 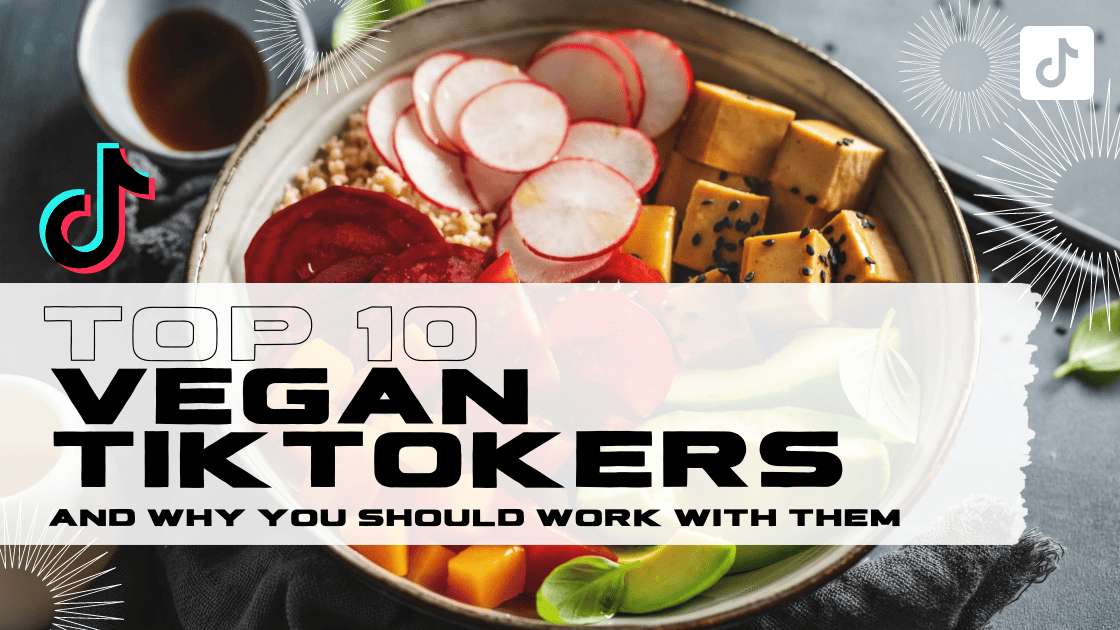 
Veganism used to be an off-beat topic. Now it’s the most talked-about foody subject on social media.

In recent years, society has become increasingly aware of the negative impact of the meat industry. This has sparked the rise of plantbased diets. In 2020, the number of vegans in the UK skyrocketed by 40% and by 2026, the global vegan food market is predicted to reach $31.4 billion. These meaty numbers show veganism is no fad.

The other norm that’s grown in that time? Social media. Vegan TikTokers are at the forefront of Gen Z’s experiences of veganism, with renowned content creators sharing delicious vegan recipes, talking about animal rights and providing plenty of vegan inspo.

More and more brands want a delicious slice of the plantbased action online – and it’s these vegan TikTokers who hold the key.

TikTok has changed the way we view recipe videos. The days of hefty YouTube shows with rambling intros are long gone. Short, sweet, punchy content has taken its place with filming as innovative as its vegan recipes. So who are the viewers lapping up these fresh ideas?

Gen Z make up 60% of TikTokers, and they’re a prime target for vegan influencers.

With 87.5% of Gen Z worrying about the environment, it’s no wonder 75% are trying to cut their meat and dairy consumption.

Vegan TikTokers are drumming up huge audiences. #vegan has over 15.8 billion views on TikTok. #plantbased clocked up viewing figures of 2.4 billion. Gen Z’s favorite vegan influencers are spreading positivity with entertaining content about food that looks good and *does* good.

So who are the top 10 awesome creators on the platform, and why should your brand work with them?

ONE VEGAN MAC COMIN RIGHT UP


If you’re asking, “Is Lizzo even vegan?” the answer is yes. She is “100% that bitch” and along with her usual entertaining content, she creates brilliant snappy vegan videos for all her fans (vegan and non-vegan alike) to enjoy.

There’s no question that Lizzo (@lizzo) is a star. She has a 19.9 million-strong fan base of body-positive revolutionaries. Brands like Absolut and Dove have collaborated with her to speak out to millions. If your audience is her audience, she’s a powerful figure to work with.


This face-on creator has already built a strong community of just under 1 million followers on Instagram, and now he’s growing on TikTok. His videos are fun, honest and packed full of plant-based cooking ideas.

Max (@maxlamanna_) clearly knows his way around Instagram and TikTok, so he effectively has a double audience. He has a youthful vibrancy that will appeal to Gen Z and millennials alike.

This vegan forager with a brilliant sense of humour has racked up over 3.2 million followers. Some of Alexis’ (@alexisnikole) most popular videos have just under 20 million views, and she has a loyal fanbase. Her videos are all about foraging vegan-friendly plants that you can find in your back garden. We’re here for it.

76% of Gen Z say that climate change is one of their biggest societal concerns. This has led many of them to be more self-sufficient in their cooking. Prominent foraging educators also said they’ve seen between 25% and 500% bumps in traffic to their sites during lockdown. Alexis is an expert in this field and provides a fun and safe platform to reach eager Gen Zers looking for creative ways to zhuzh up their meals.

Think Chia seeds and delicious frozen blueberries. Twin Coast (@twincoast) have grown a massive following through their oh-so-smooth blended vegan smoothie bowls. They create great vegan and gluten-free recipes with an insanely satisfying twist. Not to mention the vibrant colours that are certified vegan inspiration.

Since the pandemic, people have been trying to look after their physical and mental health. 7 in 10 adults say they are motivated to cut out fast-food due to coronavirus. Veggie and vegan TikTok recipes like these are inspiring millions of people across the globe. Twin coast has figured out how to communicate with them, so take inspiration for your brand to get involved.


It’s not just New York chefs and kitchen wizards you should be keeping your eye on. Foody reviewers are vegan Gen Z faves on TikTok. Clare (@thelittlelondonvegan) is an anti-food waste consultant and former Chief Vegan Officer at Papa Johns. But most importantly, she’s a foodie (a vegan one). Eating her way through the best vegan dishes in London has earned her a spot on the Evening Standard’s Best Foodies list, and she isn’t stopping anytime soon.

Reviews are one of the best ways of building trust with new buyers. Getting an influencer to review your product or restaurant experience is great to get your name out there.

80% of consumers complete a purchase after seeing an influencer recommend that product on social media, so whether it’s plantbased tacos or vegan ramen, your best bet for generating trust while building brand awareness is an influencer review.


Listening to Balle Hurn’s (@ballehurns) original sound is the ultimate in zen vibes. Her vegan recipes are simple and effective, and she often uses up leftovers in inventive hacks (like her banana peel bacon). It’s no wonder she’s one of the leading vegan TikTokers on the platform.

Balle started to grow her following from doing delicious recipes in her room at college. The trick to her success? Authenticity. TikTok has allowed users to make videos wherever they are without needing any professional tools. Balle continues to be authentic on her account, and brands should always be looking for this in their influencers.


Michael and Andre (@bynaturefood) are two vegans that came together for “big banter w/vegan food on the side”. Their TikTok recipes don’t disappoint. They’ve come up with zesty meat alternatives (their vegan chicken looks especially delish) and always serve it with a generous helping of humour.

With 39.7k followers, these guys are micro-influencers with incredibly high engagement rates. This is brilliant for brands looking to start conversations on the platform. They’re also a funny duo. Humour sells on TikTok, with #entertainment being the number one topic on the app. So choose an account like this to tickle your audience’s funny bones.


Over global lockdowns, baking surged, with flour flying off the shelves. But Vegans often get left behind in baking trends because of popular ingredients like eggs and milk. *Queue superhero music*, in flies Maggie (@maggiebakesgrace) to the rescue. She’s a phenomenal baker who does all things vegan and has just brought out her cookbook “Food is Fuel”.

Baking is on the rise (literally), and Maggie is everything a vegan could ask for in delicious plantbased sweet recipes. There aren’t many vegan sole-bakers, so she’s a great niche to tap into.


One of the top-followed vegan accounts on TikTok, Brad (@bradtheboxer) has such infectious energy that you just can’t help falling in love with. His videos are always set to upbeat music that motivates you to start cooking. Not to mention his adorable dog makes a cameo in most of his videos. That’s a perfect recipe for landing on everyone’s fyp.

80% of vegans in the U.S. are female-identifying. The gender ratio for veganism has always tipped to one side, but Brad is (perhaps unknowingly) promoting plant-based meals to male-identifying people. This is an excellent opportunity for collaboration, especially for brands targeting this part of the market.


If you google “Who is the vegan lady on TikTok?” chances are you’ll come across a person called Kadie Karen Diekmeyer, who was banned from the platform after racist and bigoted comments.

Scroll past these stories, and you’ll likely find Tabitha Brown (@iamtabithabrown). The world’s favourite Mom. The wonderfully heartwarming tone that this vegan goddess puts out is how her nickname was coined. You may have heard about her viral “carrot bacon” video, but she’s grown increasingly since then to amass a following of 4.9 million on TikTok.

Tabitha Brown is not all about vegan recipes. She’s a personal brand too, and her thoughts on religion, self-care and mindset inspire thousands. She has worked with different brands, from Sabra to The Calm App. Her followers are loyal and understand the importance of mental and physical wellbeing.

Gen Z care greatly about mental health, so it’s clear how influential she can be to that age group.


So now you know the top plant-based TikTok accounts to follow. What’s the next step?

It’s time to create a marketing strategy to ace this niche and get Gen Z talking about your brand faster than you can say “Netflix vegan documentary”.

First, you need to know how to work with influencers – something we talk you through in our article here. Next? It’s time to go viral. These steps may seem a little daunting, but don’t worry; we at Fanbytes have got you covered.

We make the process of TikTok influencer marketing as smooth as silken tofu. Our Bytesights tool helps us find the perfect vegan influencer for your brand, and our Bytesized Talent roster of TikTok influencers means we’re able to work intuitively to create the most authentic, high-performing content possible.

Check out our work with vegan food brand Wanna Date: we made them go viral on TikTok with only a £10k budget! Get in touch to find out how we can help you.

If you want more insights and useful TikTok ideas, these links below will help you get on track to be TikTok ready: